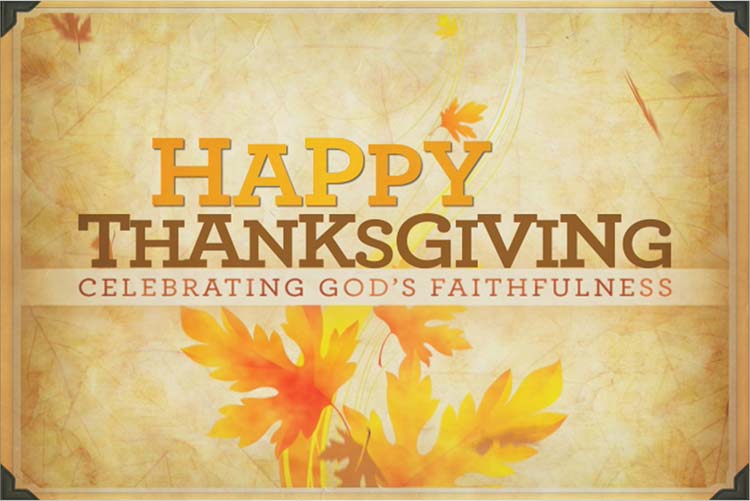 “And also that every man should eat and drink, and enjoy the good of all his labour, it is the gift of God.” Ecclesiastes 3:13
Our tradition of celebrating Thanksgiving is dated back to the Pilgrim’s observing a feast with the Indians upon the first successful harvest of their crops.

The Mayflower had set sail from England on September 16, 1620 to carry 102 people to the newly discovered land of opportunity, America.

There can be no doubt that this pilgrimage was the result of the Church of England’s desire to move back toward Roman Catholicism and it’s religious traditions. A move that was enhanced under King Charles I (1625) and produced the ensuing waves of migrants to what would become known as the “land of the free.”

King James I (1601) had however authorized the greatest minds and scholars of his day to under take the translation of the Bible into the English language so as to eliminate the many false teachings and surmising of the established religions. And though time and space will not permit a deeper discourse on this subject suffice it to say their efforts produced the greatest spiritual awakening ever to take place in human history.

With the publishing of the King James 1611 Bible the common people were no longer in subjection to the private interpretations and teachings of the priests or the self-proclaimed Vicar of Christ sitting on his throne in Rome.

Our Lord’s words recorded in the Gospel of John 8:32 “And ye shall know the truth, and the truth shall make you free” were now to be realized in a most powerful and life changing way. And the bondage brought about through ignorance of the Scriptures foretold in:

Isaiah 5:12 “Therefore my people are gone into captivity, because they have no knowledge” would no longer hold these people hostage to a false religion or man induced traditions.

The psalmist’s words, “And I will walk at liberty: for I seek thy precepts. I will speak of thy testimonies also before kings, and will not be ashamed” were now the life verse of all who shared a deep love for God and a desire to live by His precepts.

This meant a firm rejection of the false doctrines of infant baptism, papal supremacy, calling a religious leader by the title Father and the necessity of consuming a wafer and wine to obtain eternal life. Thus the persecution of these bible believers began to intensify to the point of their willingness to risk life and limb to reach America.

The Mayflower voyage was one of frequent storms and hardships lasting 66 days and never reaching its intended destination of Virginia. However in November 1620 they made shore in Cape Cod and during the first winter lost half of their fellow travelers to the harsh conditions. One year later they would harvest the spring’s plantings and stock their storehouses for the coming winter with the fruits of their labor.

Blessed and happy, they planned a celebration dinner and over 90 Indians joined them in the feast, however, they were careful to remember and acknowledge Him from whom all blessings flow.

Edward Winslow wrote of that day saying: “And although it be not always so plentiful, as it was at this time with us, yet by the goodness of God, we are so far from want, that we often wish you partakers of our plenty.”

The feast of harvest and giving of thanks to God continued each year and as more and more people fled the religious oppression of Europe our nation began to grow and prosper.

It is during these years that our nation’s independence and the need for individual freedoms would become the fabric of our culture and the means for our continued existence. A fabric woven of the biblical precepts of Christianity and a deep allegiance to almighty God and His laws of moral conduct.

Let us never forget the sacrifices others have made for the freedoms and blessings we now enjoy. Let us honor them by maintaining their demonstrated desire to worship God unrestrained by religious or governmental interference and to honor Him with their substance.

We must as individuals continue to serve God and give thanks to Him for his goodness, grace and blessings. We must continue to read, study and obey His word so that we will never again bear the shackles of tyranny and be brought into bondage by any other man, nation or religion.

God’s gifts are free to all who will receive them and his blessings are bestowed upon the just and the unjust for it is the goodness of God that leadeth thee to repentance.

May our hearts swell with the deepest gratitude as we sit at tables filled with food, in our comfortable houses, surrounded by those we love so dearly, in the greatest country on earth. And may we not forget to bow our heads in prayer and thanksgiving to God.

“By him therefore let us offer the sacrifice of praise to God continually, that is, the fruit of our lips giving thanks to his name.” Hebrews 13:15